It is probably fair to say that about 90% of people do eventing because of cross country. It is just… fun. May and I had gone xc schooling once since moving to KY, and we hadn’t really done a full XC course since our last horse trial. Again, due to the late start, we didn’t get a chance to walk the course ahead of time. Luckily, most of the jumps were visible from either the Dressage arena or the SJ area. There were 13 efforts in total. I didn’t wear a watch, so I have 0 idea how long it took us.

There was no formal start box. I decided to pick up my canter a bit before the start line so that we could have some momentum into the first jump. May, of course, wanted to throw herself on her forehand instead of creating power from behind, so we had an argument all the way to jump one.. and then onto jump two…

Jump 2 was a bit downhill, so again, I had a conversation with May about how that was not permission to fall flat on her face. Either way, we were up and over it. 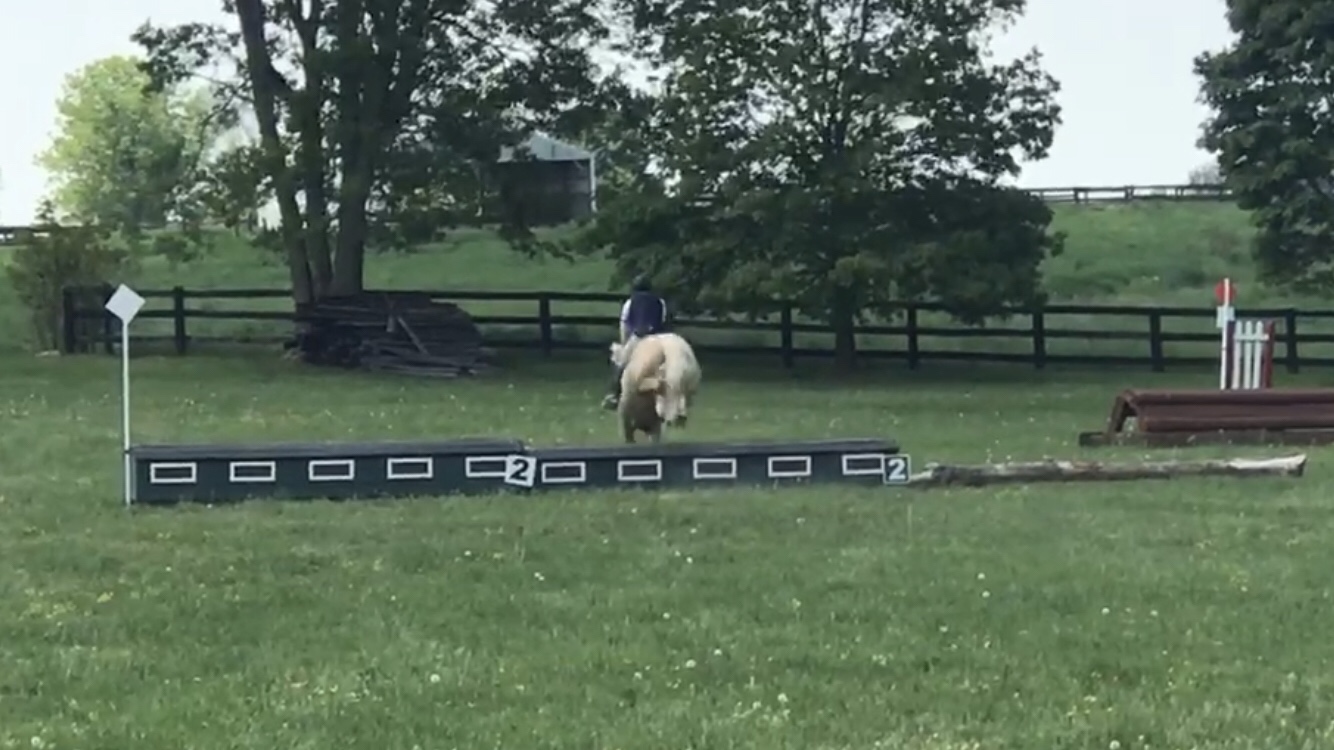 You can see us trotting at the end of the clip, as I tried to find my way to jump 3. Jump 3 was a small down bank, but it was in line with a bunch of other banks through the trees. Of course, I lined up with the larger bank that we had schooled the other week, so I had to correct my course. Either way, May dropped down like a rockstar.

Best sassy mare in the world 😊#may #crosscountry #eventing

Immediately after jump 3 was the water. The water was flagged generously, so you could go around it on the left. I took that option, since I didn’t have enough time to land off the bank, get May squared up to the water, and create impulsion towards the water. Either way, May bent her body so far away from the water that we almost missed our flags.

We galloped through a fence line and up a small hill to the 5th jump on course, this little red house we had schooled the week before. (somehow, this venue managed to move all the jumps around in just a week. It was really impressive.)

I galloped to the end of the field, looking for the only jump on course I hadn’t been able to find when I was scoping things out. It was described as a “stack of logs.” Cool, I thought, it will just be a little pyramid of logs on the ground. No big deal.

The approach was a bit odd, as the fence line kind of curved away from the jump and then back to it. I managed to find it on google maps, so you all can see what I mean! 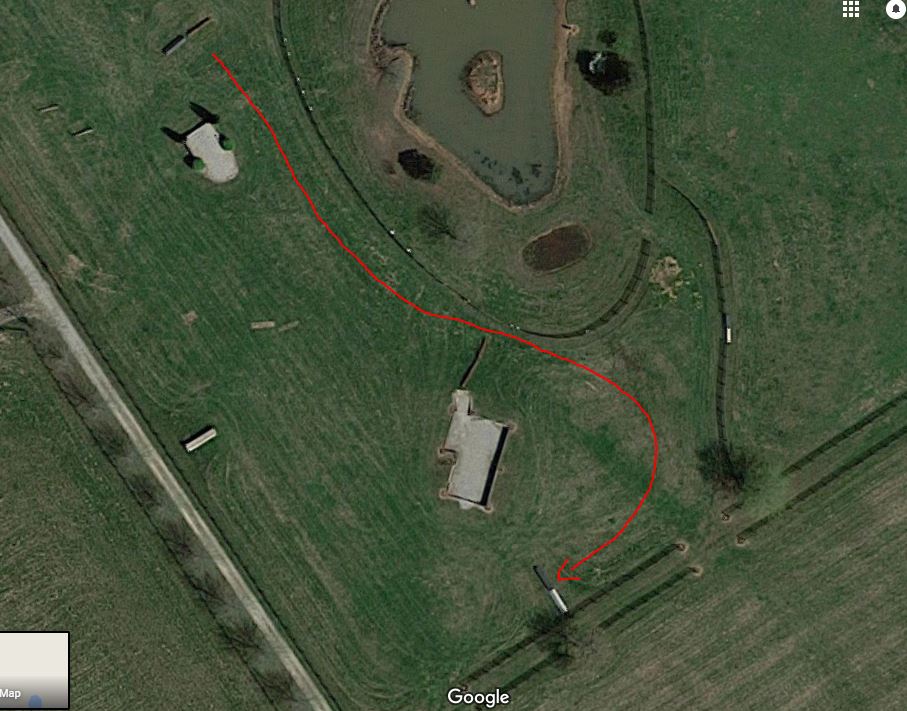 Of course, what I didn’t anticipate, was that the “stack of logs” wouldn’t be sitting on the ground. They were actually raised about a foot off the ground, making this both a bit of a looky jump, and the biggest jump on course. Cool. I didn’t look at it too long, just found my line, looked up, and kicked. May popped over it beautifully.

We had a bit of a gallop to fence 7… which I honestly can’t even remember. I am pretty sure it was just a small, brown coop. Then… I got a bit lost… I almost jumped the BN number 8, before I found my number 8. It looked tiny, so I cantered over to it. As I came upon it though, I realized why it looked so tiny. It was at the bottom of a very steep, short hill. Maybe two strides down the hill to the log. May could care less, and we were over.

We came back through the woods to number 9. Jump 9 was a cute, baby roll top. 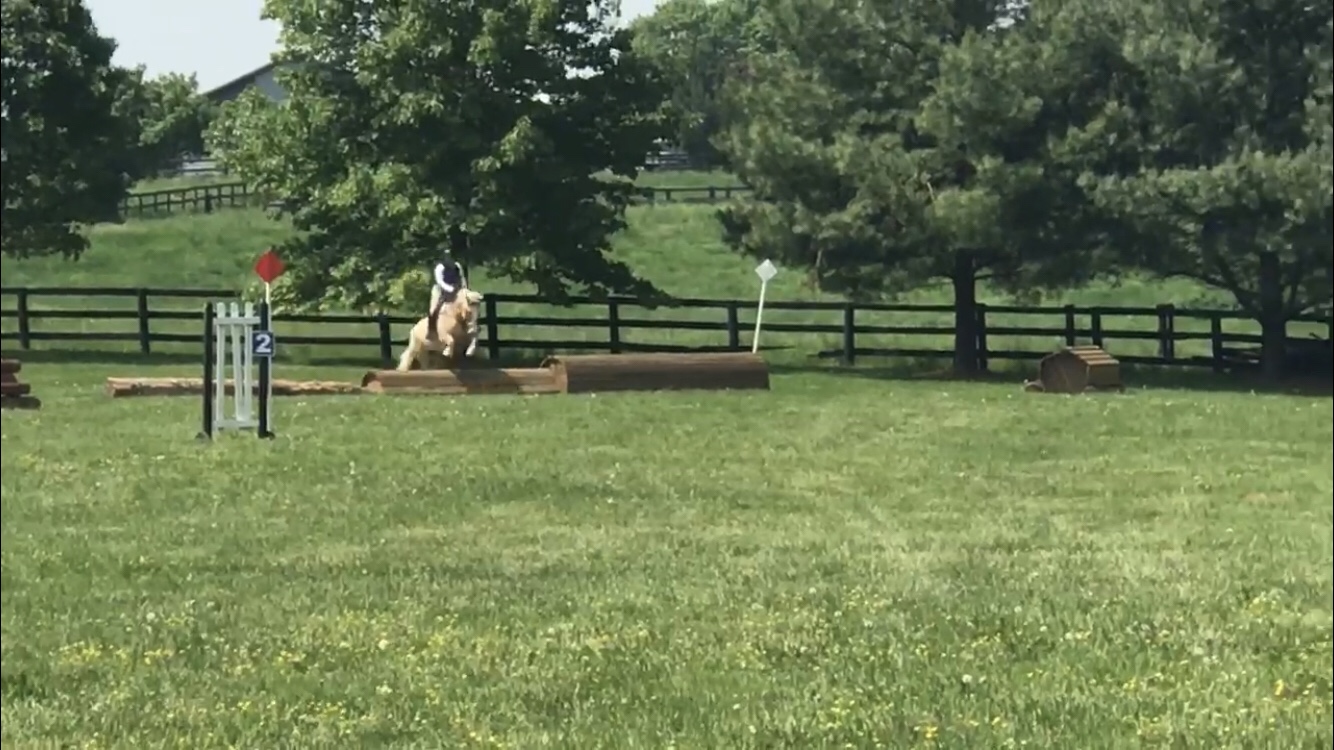 However, you can see May land and start drifting back toward the trailers (towards the camera.) Our approach to jump 10 was a bit crooked, and then we had to re-balance, turn left, and go down hill to jump 11. As a result, we had a bit of an argument over jump 10, and a not-so-flattering moment. Oh well. It was fine.

Jump 11 and 12 jumped great, and we had a nice stretch uphill to jump 13, so I asked May to give me a bit of a gallop. She did, and I got lots of compliments from people after about how much fun our course looked. Jump 13 was the last jump. It was a cute train jump, which May popped over, and then got lots and lots of pats for.

The event still had several hours to go, and the barn was only 10 minutes away. I decided it would be best to cool May off, take her home, and then come back for the final results. (especially since May decided that any of the water presented to her at the show was poison.) May hopped back onto the trailer and was all settled in at home again within an hour. I drank lots of water, and we headed back to the show for, hopefully, a ribbon. 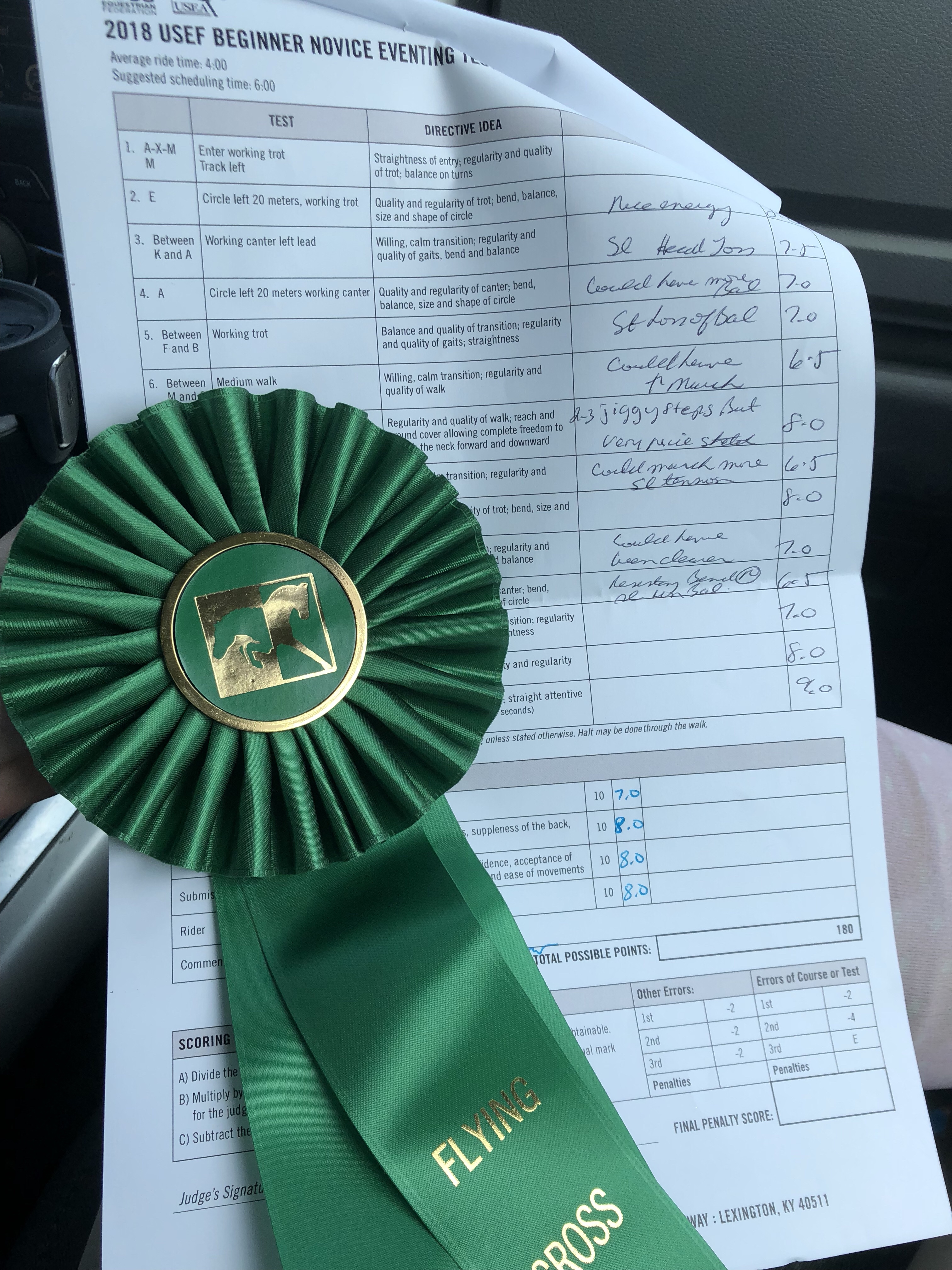 And we got one! We finished 6th out of 19 horses, adding just 4 jump penalties to our Dressage score. When I went to get my ribbon, I told them I came in 6th and asked for my ribbon… then thought about it and asked what place they give ribbons up to. Tenth! They give ribbons up through TENTH place at a schooling show! Awesome. Definitely, 10 out of 10, will be returning. 🙂

Hundreds of Hours vs. Ten Minutes

The Other End of the Spectrum