Back from our honeymoon! It was AHMAHHHHZZZIIIINNNNG, and I promise I’ll post some pics for you all this weekend.

However, I now have a pretty daunting challenge – Getting May back into shape. I rode her on Sunday, after getting back in the country around 1AM, and she was fantastic. We did a lot of walking, then ran through both BN tests for funsies, then more talking. She, fitness wise, seemed fine with it. Tuesday, I showed up to ride, and she was a bit stiff and sore. I am not sure if it’s from starting back into work or from all the mud KY.

St Lucia was pretty, but this is still my favorite view. #betweentheears #horsesofinstagram #thelwellponystatus

Either way, I decided it would be good to set a pretty strict fitness plan for the next month. I know that she does need her hocks done, but I would prefer her to at least have a solid basis of fitness before we inject the hocks again. Last time I did them when she was still fairly unfit, and it was difficult to tell if they helped or not.

With all the hill work and strengthening we did last year (and almost complete lack of jumping and competing), she never showed any signs of needing her hocks done again. Now that I am looking at a competition calendar again, I think it is only fair to call in a vet before the season really gets rolling and get some serious eyes on the whole picture. First though- FITNESS! 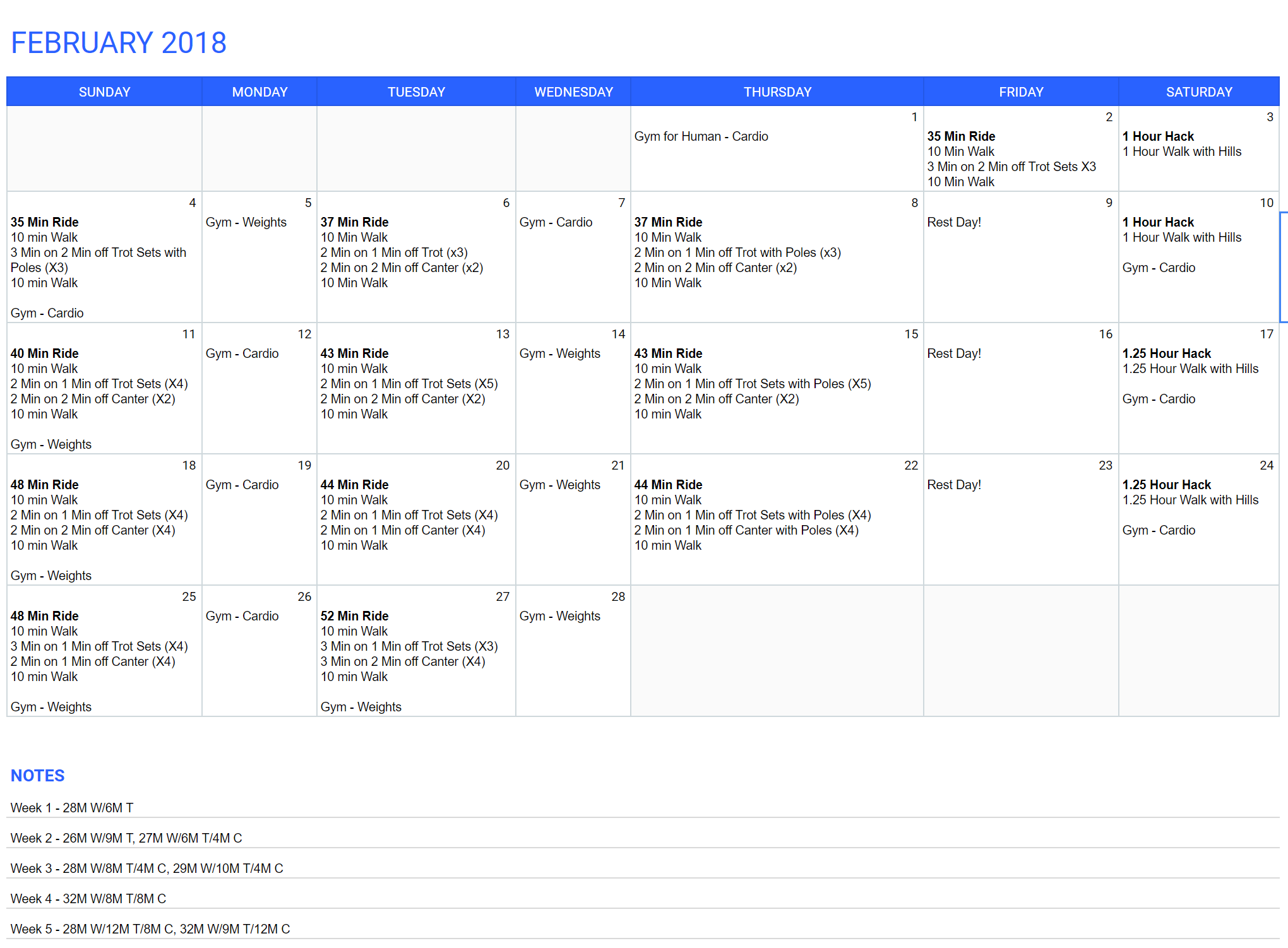 Whew! It took actually longer to build this than I thought it would. The rides of walk-heavy, which I think is totally appropriate, and I try to build time before building intensity. Given that February continues to be an unpredictable kind of month, the schedule is flexible. (i.e. today was supposed to be raining and frigid, but temps might be warm enough for a ride tonight instead of Friday)

Of course, I also forgot my stop watch today, so we will see. There isn’t a whole lot of tracking this first round anyway, so I will probably just stick to it as best as I can with my phone.

Since I have never created a plan like this… ever…, I know it will probably take some adjustments along the way. Have you ever laid out a fitness plan for you and your horse? Or are you more of a “let’s see how it feels today” type of rider?

4 Years with May & Updates

Hundreds of Hours vs. Ten Minutes