A couple of weeks ago, I did something incredible. I had an actual, honest to goodness, jumping lesson! I had spoken to my new trainer about lesson for a couple of weeks, and we were finally able to coordinate a time. (a time where I didn’t have a photographer, so there are some old pictures in here)

Originally, I was going to opt to do a Dressage lesson. I figured it would give us a chance to get to know one another while still giving her a feel for where May and I are in the process. However, at the end of the day, no matter how much it scares me, I love to jump my horse. The feeling after jumping around a great course is positively euphoric. So without telling anyone about it first, I threw on my jumping saddle and my figure eight noseband, and I walked out to the jumping arena.

To give you some perspective, I had jumped May once before this lesson. And it was over nothing higher than 2’ (ok maybe the oxer was 2’3”). I had jumped May before this to just to see where her head was at, and she was perfectly calm and listened reasonably well. I think that is what got it in my head that I should jump for this lesson. My horse was in a good place, and at some point, you have to just trust a trainer. Even if they’re new to you.

I was warmed up and ready to go before my lesson officially began. To start the lesson, my trainer had me do a few trot to canter transitions on a 20 M circle. We then stopped and she spoke about the importance of having a solid base when riding and especially jumping. She gave me a couple of exercises to help me work on strengthening my base. She didn’t say it was awful, but she did say she is a stickler for it. And heaven knows, we could all use work on the strength of our base.*

She also asked if I would mind shortening my stirrups a hole. Techically, they were where they should be, but she noted that May’s conformation needed me to ride with a  slightly shorter stirrup. I let her shorten my stirrups and I told her that I am not committed to really anything I can doing right now except for riding this horse. I think she might have thought I was joking. Either way, she told me May was very cute.

We then started jumping. The first exercise was one my trainer said she likes to use a lot. It’s a 20M circle with a low vertical at one point on the circle. She calls it the “Circle of Love” (as opposed to the Circle of Death). It’s one of those deceptively easy exercises that gets harder the more you try to do other than just riding. To the right, my crookedness came in bigtime. I kept collapsing my left shoulder in towards my right hip (yeah, it’s that bad) instead of opening my shoulders and my spine. We worked on it for a  few rounds before switching to the left, which was pretty much perfect. 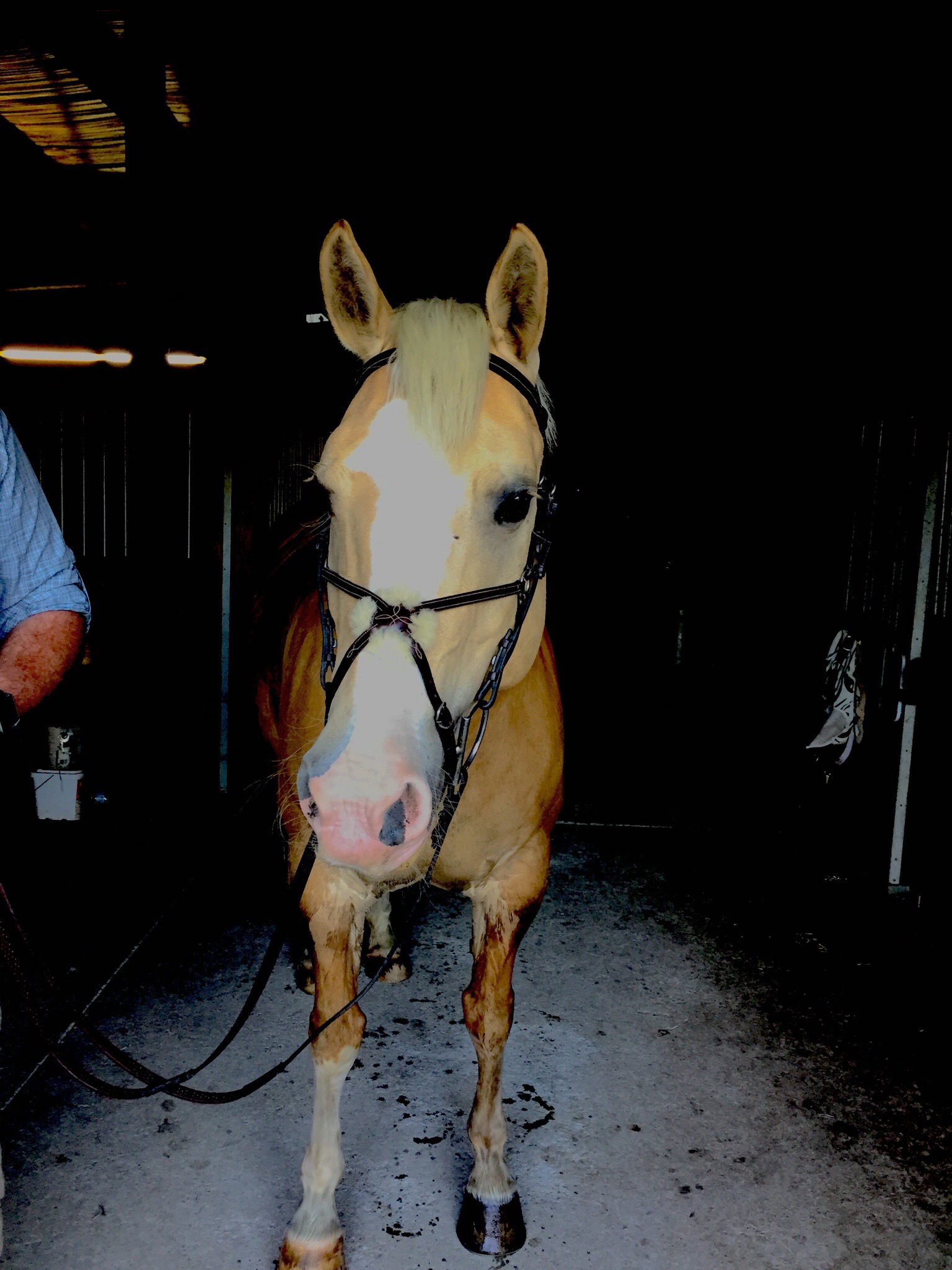 We discussed how my crookedness made it more difficult for us to stay balanced on a circle. I was told to ride while concentrating on keeping my spike in line with May’s. This is kind of hard with May, as I am not sure she has a spine under all that fluff… How about keeping my spine in line with her dorsal stripe? I can do that.

The next exercise was another deceptively easy one. Canter on the right lead over a single vertical on the diagonal. The vertical was set to about 2’3” at the time. I had a SLOW canter coming around the corner, so May opened up the last few strides. We were told to adjust to that we start strong around the corner and then balance up to the base of the jump. Fun Fact: We are AWFUL at that. Perhaps it got a big better, but the trainer noticed a bigger issue. May was throwing her whole shoulder through my right leg and hand over the fence. The Result? We ended up incredibly crooked on the landing.

She had me fix it by keeping a connection with my hand and leg all the way over the jump: approach, base, jump, landing, exit. She even drew a circle in the middle of the landing side of the jump and told me to land her there. Our first attempt I ended up all of 6” farther to the left of my first attempt. My trainer noted the improvement and told me to try again. The second time, May figured it out. She landed dead center in the circle and was so balanced I could easily circle to the left after the fence.

We then did the same exercise off the left lead, where she was considerably straighter. The vertical got raised to a 2’6” effort and we did it a couple more times. Then we got our first mini course, the vertical off the left lead, to a fan oxer (our first one ever!) then a bending line to a different vertical (the first part of this line just backwards). We were given a specific line to follow and nailed it! I did notice something though. I was being asked to ride WAY more forward than I have previously and was a touch uncomfortable. May, however, was hitting every distance spot on and was listening, so I figured we would try to embrace it. Again, however, we found ourselves moving into the trap of going slow around corners and then opening our stride to fences. Something to work on.

Then I was asked if May has done a bunch of gymnastics. And I said yes. So I was told our first course. The course started with three x-rails set 21’ apart each, so one stride in-between each. Then we came down the oxer on the diagonal. From the right lead, we picked up the neon and black box. We had a long loop around to the two stride before finishing up over the white oxer. 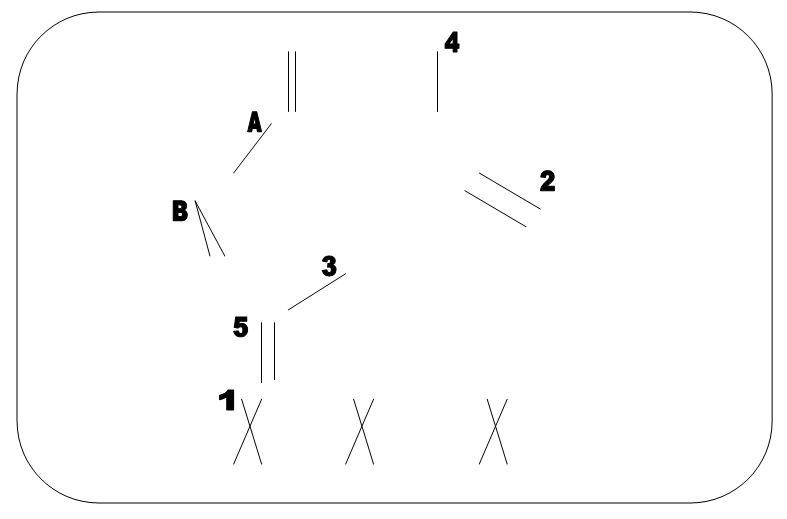 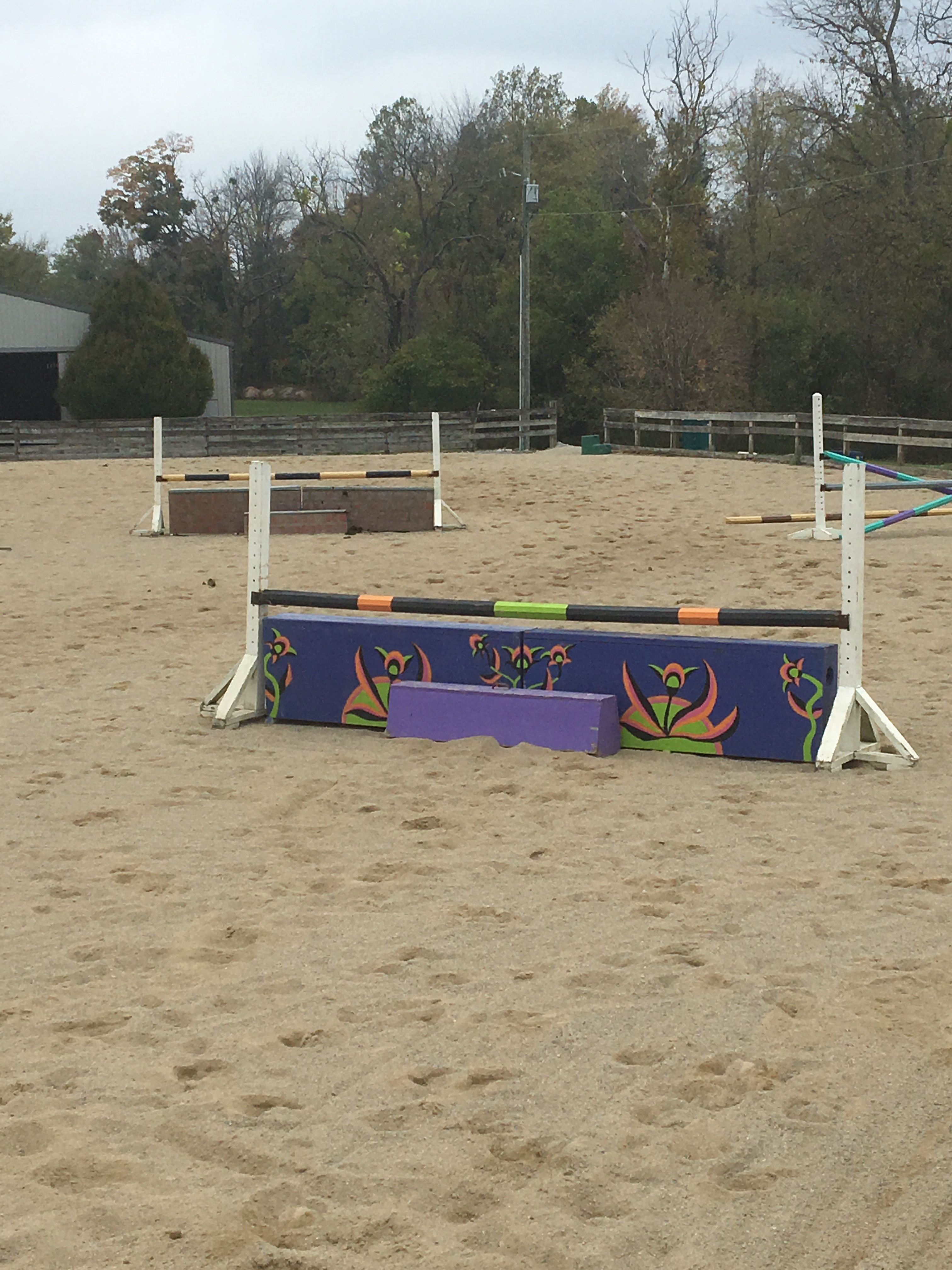 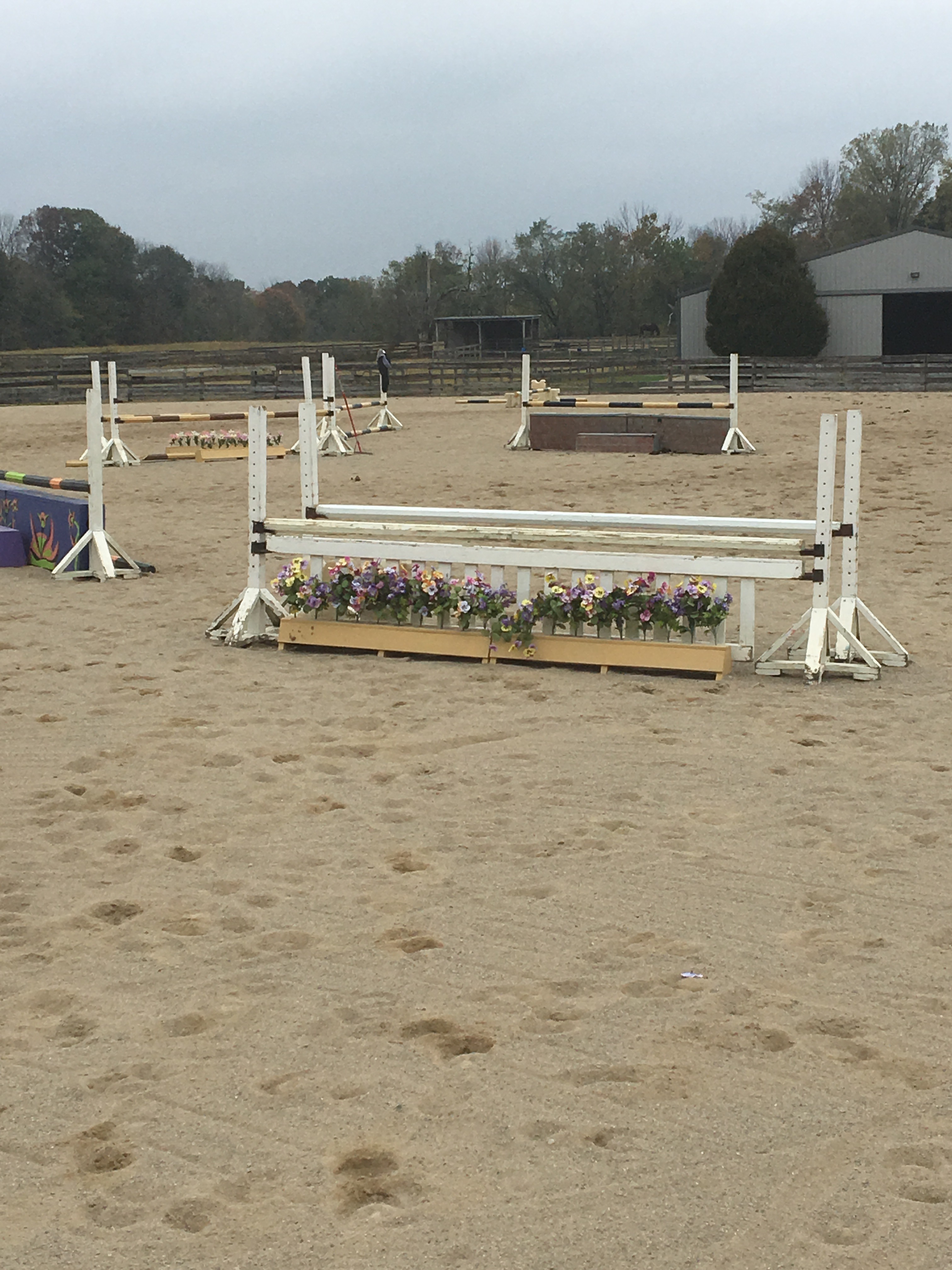 (Not on Course, but Jumped!) 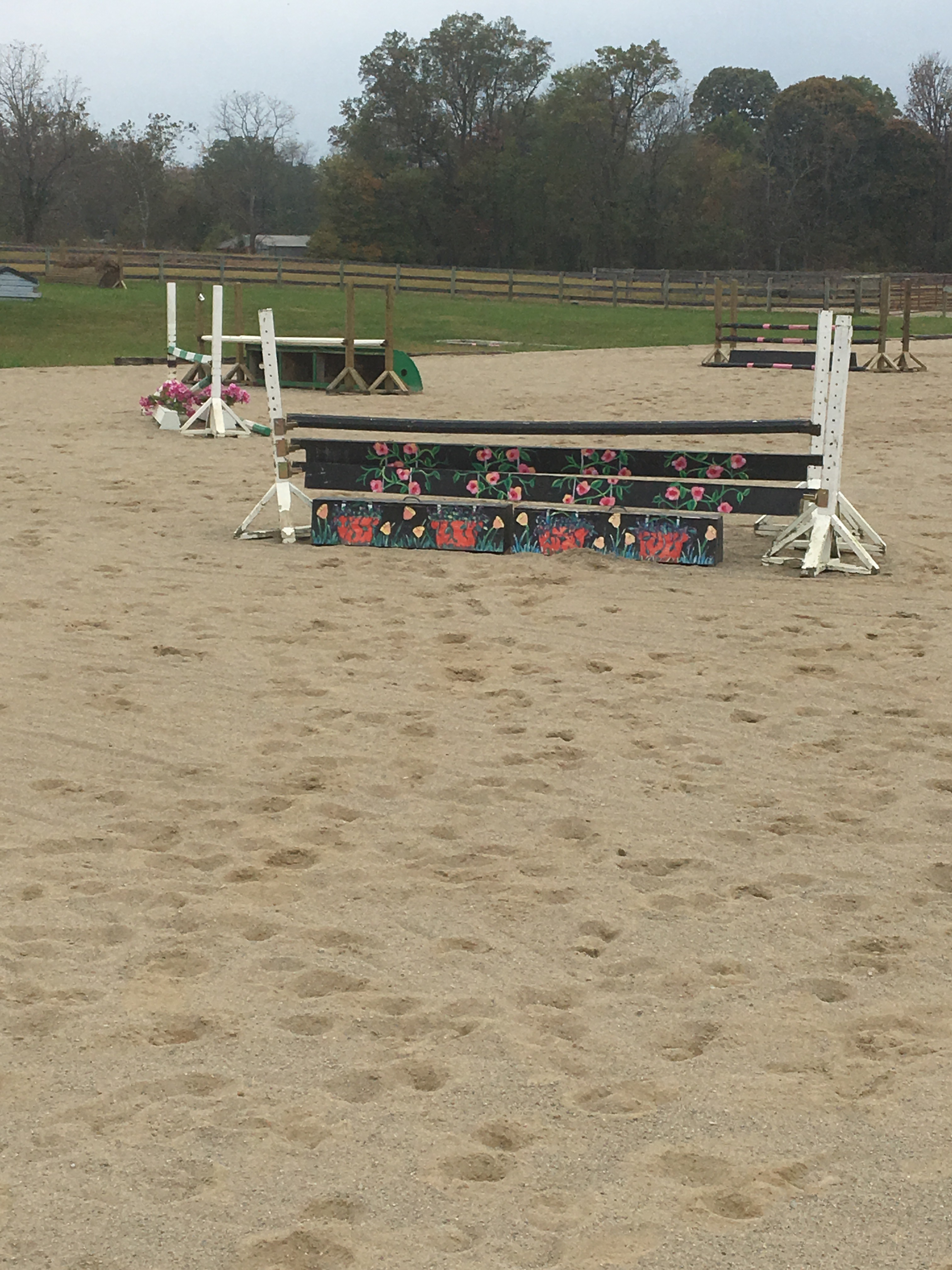 Every time I took my foot off the gas, I got a loud “CANTER!” So I rode forward. And guess what? Pretty much every fence came up in stride. The only issue I had was getting a bit unbalanced after the two stride and not getting the change before the white oxer. We redid that exercise, forcing May to come back with my half halt, but I still botched the distance to the white oxer because I lost my pace in the corner. Again, it’s something to work on. But overall? I am SO proud of May and I. We came out and performed like a real team, and at the end of the day, that’s what it’s all about.

*  Unless you’re Michael Jung or Beezie Madden. Then you’re perfect.

Last Lesson for A While